What can the G20 Power Utility Companies do to Address the Climate Crisis? 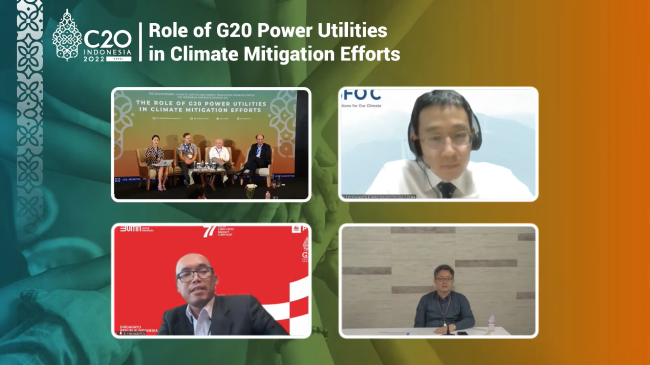 Bali, 29 August 2022 – The electricity sector is one of the biggest emitters after the forest and land use sectors. As the window of opportunity to keep the global temperature at the 1.5 degrees level is getting tighter, the urge to decarbonize the electricity sector is becoming more and more crucial. Power utility companies will be the main driver of the decarbonization effort to reach net zero emissions.

“SPCs are multidimensional. When we talk about decarbonization we have to think about SPC as they are the ones who will set the pace of decarbonization,” he said.

Philippe continued that market-based scenarios such as carbon tax, carbon trading, and regulatory pricing can be an instrument to influence SPCs to decarbonize. Moreover, the government can also make resources available to SPCs by supporting them, doing advocacy and directly exercising government shareholder power.

“The budget of the state should reflect the priority of the climate agenda in SDGs development framework.”

On the same occasion, Joojin Kim, Managing Director of Solution for Our Climate (SFOC), South Korea, presented the fact that currently, renewable energy is facing some curtailments in several regions to avoid ‘unsold’ energy.

“Globally, there is a significant increase of renewable capacity but mostly built in either the US or Europe. To keep the balance between supply and demand in electricity, some areas start to apply curtailment to renewable energy,” he said.

Joojin said that this condition is not conducive to reaching the net zero target. To align with the 1.5-degree Celcius pathways, the G20 country must have 75% renewable energy in 2040. According to him both South Korea and Indonesia are not in a good situation to reach that if there is no urgent action taken.

According to Dennis Volk, Head of Division Bundesnetzazagenturn (BNetZa), Germany, political will from the government is the key to decarbonising the electricity sector.

“A strong political commitment is needed to drive the electricity sector to the decarbonization path. The second important thing is the supporting scheme including financing,” said Dennis.

Youngjin Chae, Vice President of Strategy and Planning Korea Power Exchange (KPX), South Korea, explained that currently there are around 19% of renewables in South Korea. Issues related to flexibility, storage, and feasibility are what become a concern as renewable energy is locally concentrated.

Indonesia is planning to achieve carbon neutrality in 2060 or sooner. PLN as the nation’s power utilities company, through its Director of Corporate Planning, Evy Haryadi, said that PLN needs to build 413 GW of power capacity with around 75% renewables and 19 GW of interconnection for net zero in 2060.

A couple of serious challenges are faced by countries in developing renewable energy. Considering each situation, every country must figure out the solution as the IPCC has warned that our carbon budget is limited.

“Every country must be able to answer the issue of solving climate change, customer demand for reliable and affordable electricity, workforce needs to upgrade their skills, regulation from the government, and more technology to provide green energy,” Fabby Tumiwa, the Executive Director of IESR concluded.