Aligning the Electricity Supply to the Paris Agreement Pathway 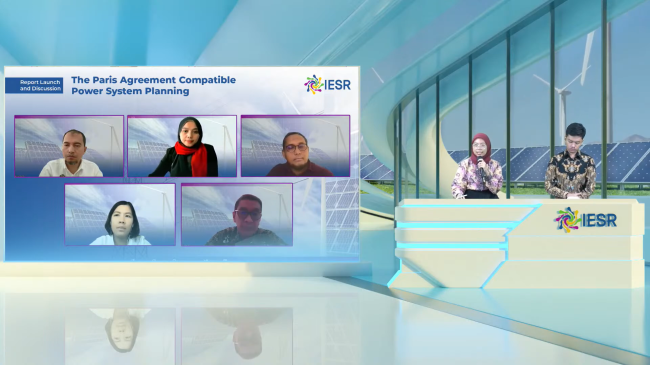 Jakarta, 24 November 2022 – Electricity has become a primary need as well as an economic driver for everyone. The demand for electricity is predicted to continue to increase both from the industrial sector and from the residential sector. In order to meet this demand and reduce emissions in the energy sector, planning with greater use of renewable energy should be designed in the RUPTL (Electricity Supply Business Plan).

In the 2021-2030 RUPTL, PLN plans to increase renewable energy capacity by up to 51.6%. Unfortunately, the amount of this target is not enough to meet the target of the Paris Agreement, which is to limit emissions and global temperature rise at 1.5 degrees Celsius.

Akbar Bagaskara, IESR’s power system researcher, during the launching of the study report “Enabling High Share of Renewable Energy in Indonesia’s Power System by 2030” explained that as a country ranked in the top 10 largest emitters in the world, Indonesia has a responsibility to reduce its emissions systematically.

“Electrification in all sectors ranging from industry, transportation and other sectors as well as the maximum utilization of renewable energy is the main key to reducing Indonesia’s emissions and then pursuing the Paris Agreement target,” Akbar explained.

Akbar explained that the renewable energy capacity that can be added to the system reaches 129 GW consisting of 112.1 GW of solar energy, 9.2 GW of water energy, 5.2 GW of geothermal energy, 1.5 GW of wind energy, and biomass of 1 GW.

Akbar also added that this study was a follow-up of the “Deep Decarbonization of Indonesia’s Energy System” study launched by the IESR in 2021 which looked at the possibility of Indonesia’s energy system achieving net zero emission (NZE) status by using 100% renewable energy in 2050.

Kamia Handayani, PT PLN’s EVP Energy Transition and Sustainability, explained that the 2021-2030 RUPTL is indeed not suitable for pursuing the Paris Agreement target.

“RUPTL is indeed not fully aligned with the Paris agreement because there is still coal involved. We (PLN) have several scenarios to reach NZE, based on PLN’s NZE roadmap until 2060, CCS can be a technology that is utilized. Yet, we must see future technological developments to meet the NZE target,” said Kamia.

Elrika Hamdi, Energy Finance Analyst at IEEFA, added that in order to align with the Paris Agreement targets, there needs to be one agency that monitors the implementation and development of renewables.

“There needs to be an agency that ensures development targets and renewable procurement which, for example, is issued by the government in the electricity system so that curtailment can be anticipated,” said Elrika.

Ikhsan Asa’ad, Chairman of the Executive Board of PJCI, highlighted the importance of building a strong domestic renewable energy industry such as solar to meet ambitious renewable energy targets.

“Currently, the price of renewables is still relatively more expensive than PLN’s electricity, but the more massive the use, the more competitive the price is expected to be. Local industry must begin to be prepared to meet the increasing demand for renewable energy components in the country,” he emphasized.

Eko Adhi Setiyawan, Lecturer, University of Indonesia, said that there is a need for demand management to mobilize customers. In addition, it is necessary to translate the Paris Agreement terminology into more concrete targets.