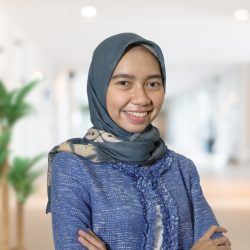 Farah is currently responsible for assisting the research team in making studies or reports as well as developing data platforms. Besides that, Farah is also directly involved as a staff of the Green Economy program.

Previously, Farah worked at a startup in the financial sector that helped finance MSMEs in rural areas as an analyst in business operations. During her time there, she was heavily involved in business development and policy. With an educational background as a graduate of Environmental Engineering ITB, Farah became increasingly aware that climate change is a global issue that will have an impact on social and economic aspects. From then on, she became interested in issues of climate change and sustainable development.

In between her time, Farah usually spends a lot of time in the kitchen, photography, and playing badminton.

Deep decarbonization of Indonesia’s energy system: A Pathway to zero emissions by 2050

IETD 2020: How to use green recovery plan to accelerate the low carbon energy transition?

A call to revisit the existing National Energy Plan (RUEN)

If only I installed solar PV rooftop before Covid-19 pandemic hit Indonesia?