India Targeting 200 GW of Renewable Energy in 2022: Is Indonesia Following? 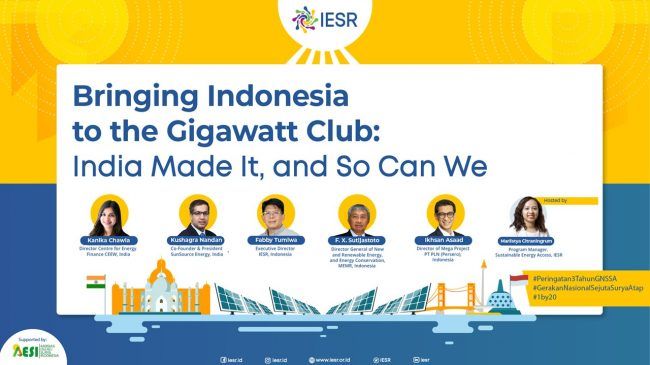 The Indian government has been formulating an ecosystem to support the achievement of renewable energy targets in its policies and programs, such as the development of solar parks and solar cities. As a result, India began to show its position as a country that only had 10 MW of solar power plants in 2010, now reaching 88 GW in 2020.

Indian government’s achievement in accelerating renewable energy is something worthies that the Indonesian government should follow. To more understand the successful recipe of solar power plant development in India, the Institute for Essential Services Reform (IESR) conducted an online seminar entitled Bringing Indonesia to the Gigawatt Club: India Made It, and So Can We. This seminar brought together solar energy industry professionals from India to share their experiences and lessons learned. Kanika Chawla, Director of the Center for Energy Finance CEEW, India, and Kushagra Nardan, Co-Founder & President of SunSource Energy, India, were the speakers, meanwhile, as the responders were Harris Yahya as Director of Various New and Renewable Energy, Ministry of Energy and Mineral Resources, Cita Dewi, EVP of Renewable Energy at the State Electricity Company (PLN), Yohanes Bambang Sumaryo, Indonesian Solar Energy Association (Asosiasi Energi Solar Indonesia – AESI), and Fabby Tumiwa, Executive Director of IESR.

Kanika explained that one of the best practices of the Indian government is to establish a renewable energy market by profiling in detail its long-term targets. It has attracted many investors, both domestic and international, to participate because they can project their industries in the next five or ten years. Moreover, many investors are interested in involving, making price negotiations more competitive and cheaper.

“Solar and wind tariffs have seen an aggressive decline around the world but also in India more specifically, and more steeply, I would say it is very much based on the large market, the market design. If at first India was a price taker, now it is a price maker,” she said.

However, Kanika explains that along the way, the market identified various risks, such as the offtake risk (payment delays), curtailment risks where the grid unable to absorb the amount of energy produced, foreign currency exchange, land acquisition, and construction, and policies inconsistencies or changes in in-laws.

Kushagra added that the Indian government mitigated these risks by implementing clear and consistent policies, both in terms of the scale of utility to net metering. Responding to the conducive environment of renewable energy in India, his company has installed rooftop solar power plants in commercial buildings such as 10 MW in textile factories in northern India, floating solar in the oil company, and rooftop solar project at the Airport in New Delhi.

Furthermore, Kushagra also shared several steps that the Indian government has taken to realize the target of renewable energy development, for example, the existence of a specialized government body to achieve the National Solar Mission with Solar Energy Corporation Of India Limited (SECI) at the national level and various agencies at the state level.

Reviewing again, Fabby Tumiwa emphasized some important notes that deserve the attention of the Indonesian government to achieve the renewable energy mix target of 23 percent with 6.5 GW coming from solar power plants by 2025.

“Indonesia needs the support of legislation and regulations in implementing renewable energy targets into more concrete programs and projects. As in India, with its Renewable Purchase Obligation (RPO) stipulated in the Act, each state is required to set renewable energy targets as a priority to be achieved. Besides, the Indian government provides supporting funding through the National Clean Energy and Environmental Fund (NCEEF) and financial assistance to project developers and optimization of public funds. Also, they create various schemes for on-grid and off-grid solar. The bidding process has also become more competitive in the format of a large-scale reverse auction, which is effective and can attract low solar price bids,” he emphasized.

The procurement process in the form of a reverse auction that is well designed, carried out efficiently and transparently, and on a large scale is one of the supporting factors in driving the competitiveness of solar power generation and results in a much lower generation price compared to fossil energy. Also, Fabby explained that the role of state governments in India is essential in the acquisition of land for the solar park scheme. The Indian government is acting directly to provide the area and build complementary infrastructure. In Indonesia, the provision of land is often constrained by permits and inadequate location, which then causes land acquisition consuming a large portion of the capital expenditure for solar power plant development.

“Regulations related to renewable energy in the form of presidential regulations are being processed. No government body specifically deals with renewable energy. Of course, there is no RPO policy in Indonesia. I think this policy is good to emulate, ” he explained.

Concerning the funding and investment issues of solar power plants, the Indonesian government is also establishing communication with international organizations. Harris also sees the problem of land acquisition as an ongoing problem in Indonesia. He hopes that in the future, he can discuss with the ministries and organizations in Indonesia, so it will be easier for investors to develop their solar power plant business. Meanwhile, both Cita and Yumarno expressed their appreciation for India’s success in managing the various risks that exist and providing proper solutions for achieving its renewable energy targets. Cita said that PLN is open to conduct deeper discussions with India in adopting learning steps for Indonesia’s progress in the field of renewable energy.

Kompas | Anticipating the Effects of the Energy Transition on the International Trade Sector
December 1, 2020 No Comments

Aris Prasetyo | Kompas.id JAKARTA, KOMPAS – The world is moving away from fossil energy towards clean and sustainable energy sources. Indonesia must be ready

Selengkapnya >
Kompas | Optimizing the Use of Renewable Energy is More Effective than the Household Level
December 1, 2020 No Comments

Erika Kurnia | Kompas.id JAKARTA, KOMPAS – The use of environmentally friendly renewable energy as a form of energy conservation is urgent to reduce the

Jakarta, Petrominer – Indonesia Energy Transition Dialogue (IETD) is back to facilitate discussions on energy transition in Indonesia. Entering its third year, this time, the

Verda Nano Setiawan | Katadata.co.id The government has appointed the Indonesian Institute of Science, aka LIPI, as the research coordinator for the development of national