500 Tons of Carbon Emissions in 2050 Potentially could be prevented, if the Government Take Serious Action in Preparing a Road Map for Low Carbon Transportation 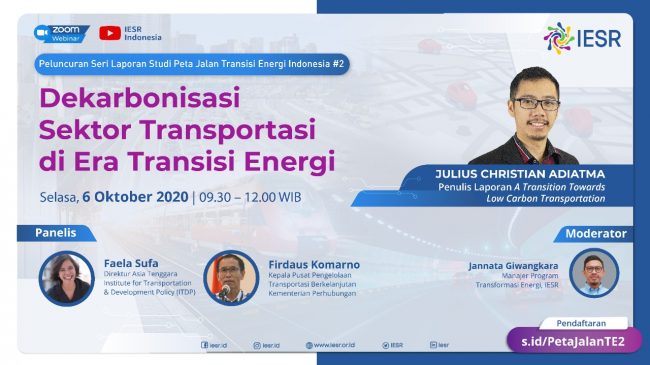 Jakarta, Tuesday, October 6, 2020 – With economic development, transportation has become a necessity that is inseparable from our everyday life. If its carbon wastes have not been handled carefully by the government and various parties, the earth’s temperature will be compromised, which endangers human life. It also means that Indonesia will fail to meet its promise in the Paris Agreement with zero emissions by 2050. This urgency was discussed by the Institute for Essential Services Reform (IESR) in the launch of its second series of five reports on the Indonesian Energy Transition Roadmap entitled A Transition Towards Low Carbon Transport in Indonesia: A Technological Perspective. Conducted online this event was attended by Firdaus Komarno, Head of the Center for Sustainable Transportation Management of the Ministry of Transportation, and Faela Sufa, Southeast Asia Director of the Institute for Transportation & Development Policy (ITDP), to respond to the findings and recommendations of the report written by Julius Christian Adiatma.

Julius explained that as the largest fuel consumers, transportation contributed around 150 million tons of greenhouse gas (GHG) in 2017. If the energy consumption pattern remains the same, in 2050, it will produce 500 tons of carbon emissions. He offers three approaches to reduce the use of fossil fuels and mitigate the impact of the energy transition in the transportation sector, namely Avoid, Shift, and Improve (ASI).

“The Avoid approach means that as much as possible, we reduce the number of trips and the number of transportation needs through better urban planning. Meanwhile, the Shift is shifting to a mode of transportation that is more energy-efficient or less carbon-intensive. Improving means increasing the efficiency of the vehicle or the carbon intensity of the vehicles,” he explained.

Discussing energy-efficient modes of transportation, Julius suggested the development of light vehicle electrification. However, this requires careful planning by taking into account the electrical system in Indonesia, which still uses coal, and the lack of supporting infrastructure such as electric vehicle chargers.

“The point is, whether we like it or not, the energy transition is inevitable. Of course, it causes some side effects, for instance, infrastructure unpreparedness or technology choice errors. A decrease in economic activity or the occurrence of stranded assets, “he added.

Julius also mentioned the goal of the Ministry of Transportation’s road maps, based on his study, is not comprehending the Paris Agreement.

“If we look at the roadmap of the automotive industry until 2034, if I am not mistaken, only 30 percent of vehicle production is in the form of solar energy vehicles or fuel cells. If so, then the projection in 2020, only 30 percent of electric vehicles will be on the roads, ”he explained.

He stated that the energy transition road map in the transportation sector must contain infrastructure development that is in line with technological developments, anticipate the economic-social impact of the transition along with its mitigation plans, as well as research and development of alternative low-carbon transportation technologies. Besides, the government must have a plan and ensure that this transition process is successfully implemented while reducing the risks from the transition process that occurs, especially to the stakeholders involved (including industry players, workers, and affected communities).

Responding to Julius’ explanation, Faela agreed that the government must be more proactive in addressing the need for low-carbon transportation, not only at the national level and even at the regional level.

“There is a need for road maps and targets at the regional level to switch to public transportation with renewable energy so that it is not only about electricity,” she said.

She also suggested that the Ministry of Transportation could encourage non-fiscal intensive policies in local governments, such as lower parking tickets for low-carbon vehicles.

Responding to this, Firdaus Komarno generally agreed on Indonesia’s need to make an energy transition. Through his presentation, Firdaus revealed that the government has issued various policies to encourage energy transition in the transportation sector. However, he admitted that it was not well integrated.

“Hopefully, in the future, especially the three Ministries, such as Energy and Mineral Resources (ESDM), Transportation and Industry work together, integrate to guard this low-carbon development,” he hoped.

Firdaus has the same view regarding the challenges of the energy transition in Indonesia. In addition to what Julius has mentioned, one of the obstacles the government faces is the absence of a stipulation of electricity rates, so it does not provide certainty for electric vehicle manufacturers. Moreover, the government has not issued a policy of providing incentives for users of low-carbon vehicles. Furthermore, Firdaus feels happy and open if there is an opportunity for discussion for his party, IESR, or other organizations that have the same vision to achieve low carbon transportation in Indonesia.

A Transition Towards Low Carbon Transport in Indonesia_ a technological perspective

Bali can lead as the clean energy province, the island owned enormous potential for technical and market of solar PV
15 June 2021 No Comments

Jakarta, 28 May 2021 – The Institute for Essential Services Reform (IESR), a think-tank that focuses on renewable energy and environmental issues, launched its latest

“Solar cells will be the new promising commodity in the future, just like oil now,” said Fabby Tumiwa during his explanation in the REinvest Indonesia