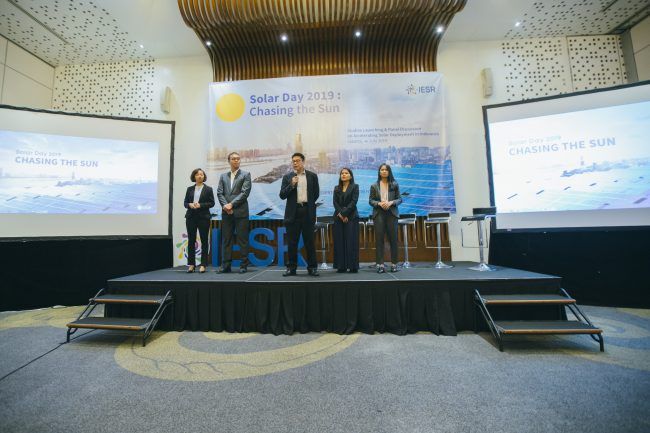 Indonesia is known for its abundance of sunny days. The country receives 3.6 – 6 kWh/m2/day of solar irradiation intensity, equivalent to annual power output of 1,170 – 1,530 kWh/kWp (World Bank & Solargis, 2017). The National Energy Policy (KEN) has set a target of solar generation at 6.5 GW in 2025 and 45 GW in 2050. However, Indonesia has observed limited growth on solar deployment, both for utility-scale solar generation and rooftop solar. Until late 2018, the total installed capacity of solar power plants has only reached 95 MW (Ministry of Energy and Mineral Resources, 2019), while PLN’s Business Planning (RUPTL) for the year 2019-2028 only targets a cumulative construction of 2 GW solar power plants until 2028.

Globally, solar is the fastest and highest growing renewable energy source. Since 2010, the addition of solar power plants continues to increase exponentially every year, reaching an additional 97 GW (net capacity addition) in 2017 and 2018 (IRENA, 2019). In 2018, the growth of solar energy slightly declined due to slowing growth in China; the symbolic number of 100 GW was not achieved that year. However, solar energy is predicted to continue to grow massively, in line with the increasing numbers of developing countries’ pursuit of renewable energy deployment and the falling costs of solar generation.

Indonesia has sufficient technical potential of solar energy to meet its current and future energy needs. There is also a huge market potential for rooftop solar for homes, commercial buildings, government buildings, and industries. The cost of solar generation is getting cheaper, in several countries the cost is on-par with fossil fuel-generated electricity, even reaching grid parity. How this works in many countries is through reverse auction mechanism, and Indonesia could follow suit. These are important findings obtained from 4 IESR reports launched on the event IESR Solar Day 2019 – Chasing The Sun (Tuesday, 30/07) in Jakarta. The reports are: Under the Same Sun: A Cross-Country Comparison of Conditions and Policy Supports for Large/Utility-Scale Solar PV Projects, Residential Technical Solar Rooftop and Market Potential in 34 Provinces in Indonesia, Powering the Cities: Market Analysis and Recommendations to Accelerate Solar Rooftop Development in Two Metropolitan Cities in Indonesia, and Powering the Cities: Technical Potential of Rooftop Solar for Public and Commercial Buildings in Two Metropolitan Cities in Indonesia. The event was well attended: more than 100 participants, coming from government bodies (national and local), EPCs, associations, financial institutions, individuals, university researchers and lecturers, and media journalists.

For 34 provinces in Indonesia, IESR estimation shows technical potential (residential only) of 194 – 655 Gigawatt-peak (GWp), Hapsari Damayanti (IESR’s Program Officer for Sustainable Energy Access) presented. Of the total number of households in Indonesia, ca. 17.8% of them have financial capability to install rooftop solar, equals to 34 – 116 GWp. This amount represents the market size of residential rooftop solar that can be achieved in the next few years. This number could be an important information for policy makers in energy sector, PLN (state-owned utility), and other solar business players; that Indonesia has significant market size to develop and that the utilization of solar energy would be one of Indonesia’s contribution and answers to tackle climate change crisis.

In the last ten years, the price of solar modules in the global market has declined by more than 70% and continues to decrease. In addition, there is also substantial increase in the efficiency of solar modules. Countries with high appetite for solar energy are enjoying this trend so they are able to reach record-low electricity price. IESR analyses on solar generation costs of projects in Brazil, UAE, India, Mexico (countries managed to get the lowest record of solar generation) show what they have in common: political willingness translates into ambitious national targets, provision of supporting policies, de-risking instruments, and fiscal incentives, as well as effective implementation reverse auction mechanism. This specific procurement system creates cost competitiveness, and Indonesia certainly can learn one thing or two, said Pamela Simamora (IESR’s Research Coordinator). IESR recommends government and PLN to use reverse auction mechanism for large-scale solar power plants, ideally for capacities above 100 MW. The reverse auction method has proven to be effective in increasing competition among developers, driving cheaper price without damaging the economics of the project.

In addition to estimating technical potential, IESR also conducted market studies for residential rooftop solar in 2 metropolitan cities: Greater Jakarta (Jabodetabek) and Surabaya. The studies reveal a certain percentage of homeowners interested in installing rooftop solar with no or little strict financial consideration; categorized as early adopters. There are also a group of interested homeowners with heavier consideration of high investment cost and financial benefit of installing rooftop solar; fall under early followers group. The number of early adopters and early followers combined is 13% and 19% for Greater Jakarta and Surabaya, respectively. Homeowners in these two metropolitan cities each have unique perceptions and expectations on rooftop solar use. These two factors determine their purchase intention level.

With current market price at IDR 13-18 million/kWp, upfront cost or initial capital investment for installing rooftop solar is still considered high. However, Marlistya Citraningrum (Program Manager for Sustainable Energy Access) highlighted that early followers group would be more inclined to decide installing rooftop solar if they have comprehensive information about the technology, have access to credible providers/EPCs, and access to fixed-instalment scheme. They also expect guaranteed performance of rooftop solar, the availability of after-sales service, and fiscal incentives; to reduce high upfront cost and shorten payback period. The market studies found most homeowners prefer instalment scheme with tenor period of 5 years and they expect incentives from the government to decrease their capital investment, as well as assurance of product quality. IESR recommends the government to provide rebate for solar panels/modules and to offer discounts on land and building tax (PBB) for a certain period of time for houses installing rooftop solar. These incentives can increase financial viability and decrease return on investment for homeowners.

Panel discussion led by Fabby Tumiwa (IESR’s ED); featuring Directorate General of Electricity (MEMR), PLN’s Renewable Energy Division, Indonesia Solar Association (ISA), LEIN Power, Mandiri (as part of Indonesia’s Sustainable Finance Initiative), and World Energy Council elaborated more on the reports and how the findings could be translated into strategies to accelerate solar energy development in Indonesia. Grid-wise, solar energy penetration is met with concerns on balancing supply and demand, system readiness, as well as ancillary cost arisen from renewables integration. Access to fundings is also a constraint, as government and local banks still considers renewable energy projects as risky; thus, imposing high interest rate. IESR recommendation for the use of reverse auction for large-scale solar power plants could be an answer to these challenges, given proper auction design and strict implementation.

Insights from IESR reports on technical and market potential are considered imperative to boost solar deployment. One Million Rooftop Solar Initiative (OMRSI), declared and signed by 14 different organizations and government bodies (including IESR), has set a cumulative target of 1 GW rooftop solar by 2020. As highlighted by Indonesia Solar Association, knowledge on technical and market potential for rooftop solar in residential, public buildings, and other buildings, as well as preferred procurement and financing scheme will help in sharpening the strategy of achieving OMRSI target. LEIN Power as one of solar EPCs also mentioned that homeowner’s consideration for installing rooftop solar is diverse, which affects message crafting and means of communications. His experience with one homeowner in East Java was aligned with IESR’s market study insight: people in Surabaya have the attitude of “I like cool, high-tech stuff”. It is certainly a good catch for solar EPCs on how to market their products.

With limited financing available on the market today, homeowners can consider using multi-finance credit scheme from banks to install rooftop solar. However, interest rates are not low, and this may discourage them. Indonesian banks, as stated by Mandiri’s VP of Energy Sector Department, has no available specific financing scheme for rooftop solar; and future financing scheme that can answer homeowners’ expectation must be regulated first by Indonesia Financial Authority (OJK) or else the government could provide incentives for the banks so they can offer low interest rates.

It no longer should be “chasing the sun”, it is time for massive solar deployment. And so yellow is the new black.