Technical issue is not the main barriers to the renewable energy transition, financial and regulatory issues are 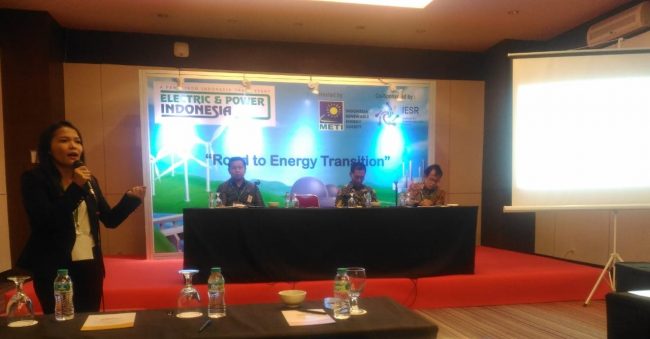 IESR (Institute of Essential Services Reform) and METI (Masyarakat Energy Terbarukan Indonesia/ Indonesia renewable energy society) held a one-day joint seminar on the 12th September 2019 on the topic of the Road to Energy Transition in Indonesia as a part of the Electric and Power Indonesia sessions held from the 11th-14th September 2019 at Jakarta International Expo Centre. The largest four days event covered both industry stakeholders in a series of seminar and industry expo, as well as complementing the Renewable Energy (RE) and Energy Efficiency (EE) Indonesia 2019 exhibitions. 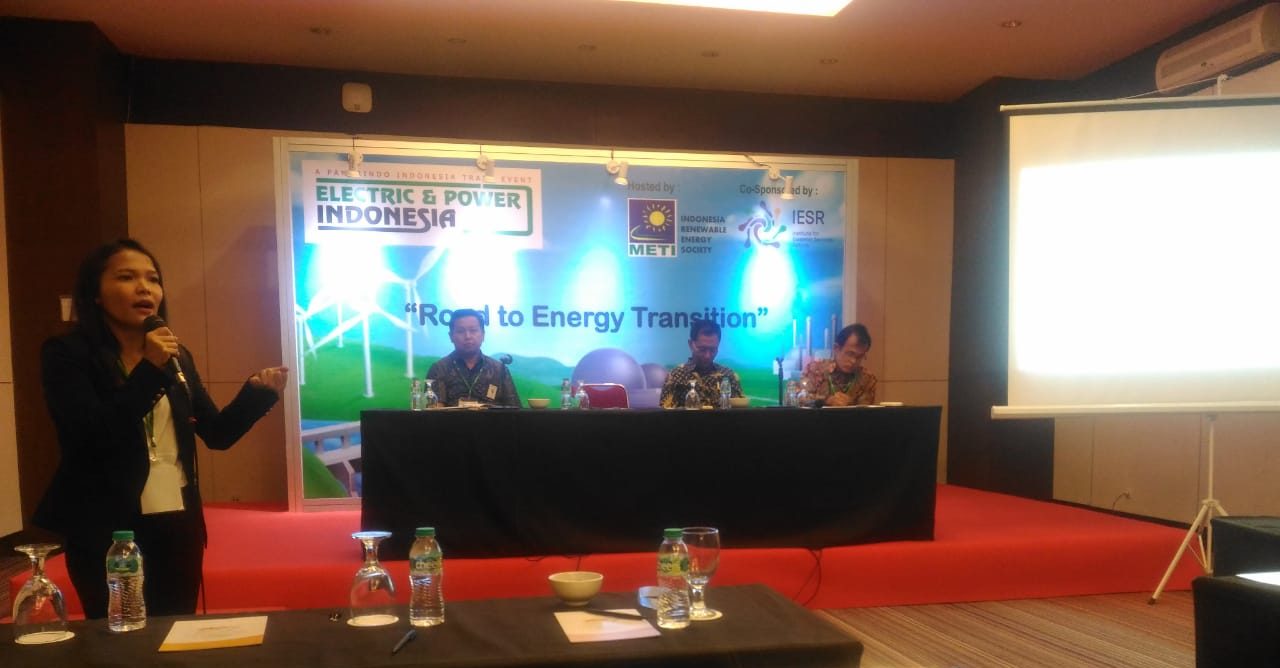 The event began with welcoming remarks from the Chairman of METI, Dr. Surya Darma. Featured Haris from the Ministry of Energy and Mineral Resources (MEMR) Directorate General of New and Renewable energy and Energy conservation (Dirjen EBTKE), Dewanto from PLN, Pamela Simamora from IESR, and Prof. Dr. Rinaldy Dalimi as the Chairman of the Expert Board of METI and a former member of DEN (Dewan Energi Nasional) seating as a panelist of the seminar.

Dr. Rinaldy Dalimi has the opportunity to address first time, regarding the Road to Energy Transition in Indonesia. He highlighted that the use of distributed generation is increasing, as more people use rooftop solar PV at homes caused by the declining prices of solar modules, the use of electric vehicles were also growing.

Hence, Dr. Rinaldy also stressed out that these technologies become disruptive technologies that may affected the PLN’s power Systems and trigger the phenomenon called as duck curve; a condition that happens in California when the solar energy is used massively (sometimes over-generation) during the day. Therefore gives challenges for utilities to ramp up the non-solar generation rapidly (a ramp of 13,000 MW in 3 hours) at night when solar energy is not available.

Haris, on the other hand, highlighted the importance of energy transition in Indonesia to address the Energy Trilemma: Energy security, Environmental sustainability, and Energy Equity. Electricity system of the future will use smarter grids which are vital for power systems with high shares of distributed generation and storage systems.

Meanwhile, Pamela Simamora from IESR highlighted that Indonesia requires a transition to clean energy like the rest of the world where there is a growth in renewable energy investments. She underscored that Indonesia obtains 80% of its electricity mix still from fossil fuels and about 60% from Coal alone. She highlighted the coal-related health costs in Indonesia and that these far outweigh the expense of cleaner renewable energy. Pamela also raised the issue that with the decreasing costs of renewable energy, there is the risk of stranded assets of fossil power plants in the future. It was also importantly highlighted that based on IESR’s study in 2018, there is no need for grid upgrade for 43% renewable share in 2027. 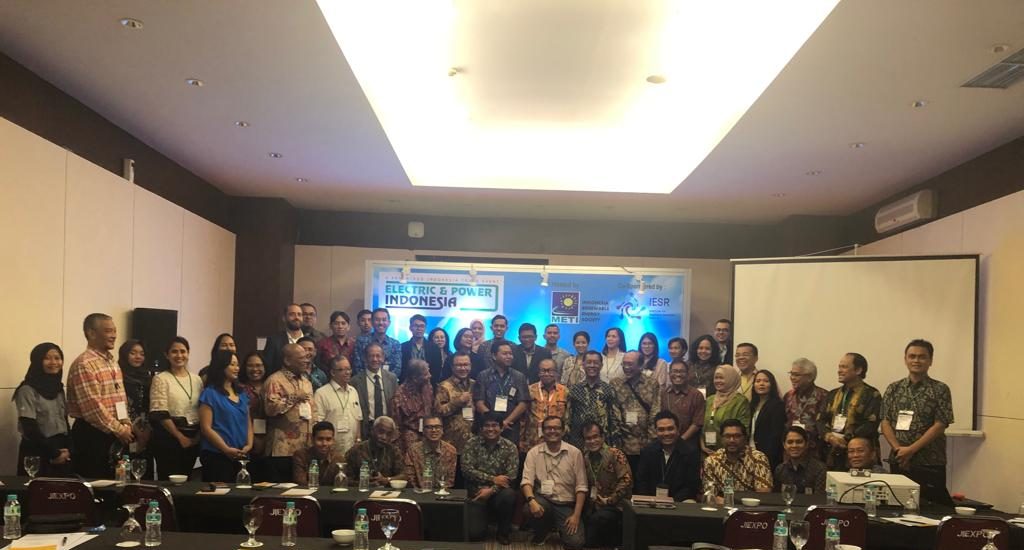 From the discussion elaborated that actually, the technical problem is not the main barrier to renewable energy development in Indonesia.

The huge potential in Indonesia for solar with a total rooftop solar potential of 655 GWp from a high scenario of 81% rooftop utilization is a fact. We were wondering why Indonesia still relies on Coal when the country has substantial renewable energy potential.

The renewables development in Indonesia is lagging behind other countries and that there is a long way to go to meet the 23% primary energy mix renewable target by 2025.

The various barriers to renewable development in Indonesia also may can’t be separated from the political economy from coal interests, the regulatory obstacles from regulatory uncertainties, market entry barriers such as subsidies for fossil fuels and even the technical barriers such as the geographic condition of Indonesia. However, she reiterated that technical barriers are not the main hindrance, but the finance is. Hence there are needs for channeling sufficient funding to help accelerate the development of the renewables in Indonesia.

Indonesia should establish renewable energy fund in the future, Pamela added. We can obtain fund from taxes on Coal and fuel or a surcharge on electricity. This funding mechanism would help provide financial instruments for renewables where many renewables projects are undergoing difficulty to get financial close due to the un-bankability of renewables projects. We have estimated that from the highest funding scenario, Indonesia could obtain up to 4.5 US billion USD for renewable energy fund collected from fossil taxes and surcharge.

In regards to the renewable investments in Indonesia, the MEMR also mentioned that currently, there is a power purchase agreement plan in place with a total of 155 projects that is equal to 10 billion USD investments. However, the MEMR did not elaborate on the details and progress of this plan.

Indonesia needs innovative financial instruments such as the renewable energy fund as well as a law that guarantees the sustainability of renewables development in Indonesia. This law called: UU EBT, has been formulated in the parliament with the assistance from all stakeholders, including METI. METI suggested the lawmakers to include fiscal incentives such as renewable energy fund in this law. This law deemed to be a solution to the legal and regulatory uncertainties that are currently hampering the development of renewables in Indonesia as well as will become a legal umbrella for energy transition in Indonesia, Surya Darma concluded.

The event was well attended to almost 100 participants coming from Private enterprises, business associations and government entities, with high engagement on the regulatory framework, and PPP tariffs.

Materials presented at this event can be accessed here:

How PLN could adapt to Energy Transition